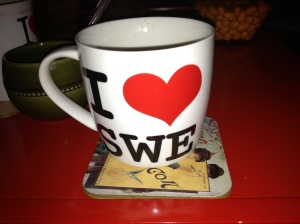 I love my country and am proud when telling someone I’m from Sweden. I’m aware of the negative aspects some people would hand to you (the weather is depressing, it’s hard to make Swedish friends, there are stupid rules for everything, even alcohol is only available in state-owned shops with limited opening hours) and I will agree with some of these things – but if I hear someone critizice Sweden too much I get sad. Why? Because it’s my country!

In an ideal world everyone would love their country and be proud when telling someone where they are from. I once met a guy in a party who asked me to go on a date with him, that said he was from “close to the Iranian border”, when he really was from Afghanistan (I have a tendency to ask people around one million questions when I meet them, so he couldn’t hide this fact for too long). This I find a bit sad, since he obviously didn’t think he’d have a chance with a white girl if he said where he really was from. In an ideal world people wouldn’t be ashamed of being American because many people dislike George W Bush; Germany because it started the Second World War; an underdeveloped country because it’s an underdeveloped country. I believe that change must come from both the outside as from within, why I want to challenge everyone to say that they love their country and give at least three reasons why. No country can be so bad that you cannot give at least three reasons to love it, right? Here’s why I love Sweden:

I love that there are bike paths everywhere

I love that people are honest to the point where it hurts, but at least you won’t get fooled (“If I want to hang out with you this weekend? No, I don’t think we have much in common”)

Which ones are yours?

8 thoughts on “I Love My Country”