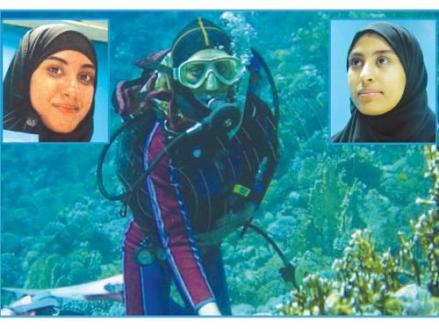 Two sisters from Sanabis town on Tarout Island on the Eastern coast of Saudi Arabia made headlines this week as some of the few professional women divers in the country.

The local newspaper Saudi Gazette reports that Noor and Taammul Al-Dubais were raised in a seafaring family and that they have been surrounded by water all their lives. Noor was 5 when her father taught her how to breath under water and the sisters held their international diving licenses as 10 year olds. Now they wish to pass on their passion for diving to other girls. They are diving as a professional duo and have been diving on many different occasions.

They started to dive in the city of Jubail on the east coast, around Jana Island. Noor says to the newspaper Alsharq daily, regarding her diving experiences in the Red Sea off the coast of Jeddah:

”I swam among the beautiful coral reefs as if I was a bird flying in a garden. I enjoy diving because my soul separates from my body when I am at great depths.”

She says she finds guidance in her parents and that her friends from school encouraged her. The sisters’ father has been a great supporter and he himself is also a diver and a fisherman. He is also Noor’s and Taammul’s professional trainer and has designed a special diving suit for women that he said respects Saudi customs and traditions. Sports for Saudi women are not accepted by everyone and professional sports women in the Kingdom are an exception. But the sisters’ father says:

“Noor and Taammul are part of a diving family that loves to look for coral reefs and explore the magical waters of the Gulf. All of my sons and daughters are divers.”

Hopefully Noor and Taammul will set an example for many other brave young women around the world.