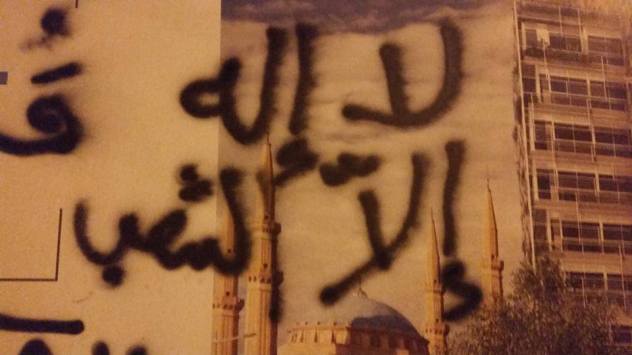 Is it maybe a comment to the ongoing protests against the uncollected garbage in the city, the so called Garbage Crisis? Or is it a comment to the terrorist groups in the region, pretending to commit crimes in the name of God? Or maybe it’s just the people being fed up with not being listened to by anyone in power?

The graffiti reads, in translation:

“There is no God but the people.”

Did you get the reference?

From the artist Alfa in Gaza, together with the rapper Sami Bakheet, who usually plays in Darg Team, here is the song “Refugee”.

The lyrics are on how the journey begins in Gaza, and where it ends. The reasons you have for leaving Gaza in the first place, until you meet reality.

Even if you don’t understand Arabic, I still hope you find the song nice to listen to.

You can now read the subtitles in English if you click “settings” -> “subtitles” on the Youtube clip.