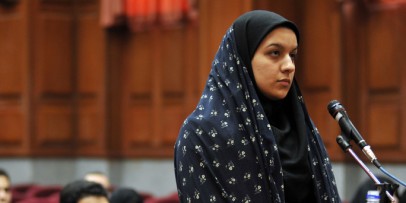 As Reyhaneh Jabbari was hanged yesterday, the 26-year old Iranian woman convicted of stabbing a man who tried to rape her, international media filled up with stories about the unfair trial and the torture Reyhaneh supposedly was exposed to before being sentenced.

Reyhaneh claimed that she met Morteza Abdolali Sarbandi in a coffee shop and after he asked her to come to his office to discuss a business deal, he tried to rape her, why she in selfdefence stabbed him with her pocket knife before fleeing. Her lawyer reportedly published on his blog about the unfair trial against Reyhaneh as a plea for help, there were media campaigns against Reyhaneh’s execution, but the media attention didn’t help. After 7 years in prison, for which under some time she was prevented from contact with her family and from having a lawyer, she was hanged in Gohardasht prison in Teheran on the morning of Saturday October 25.

I asked an Iranian man that I know who’s living outside of Iran how he felt about the hanging, and he had many things to say. These are his words:

“Reyaneh has basically been considered guilty to one thing, and that is that she has defended herself as a woman. In many ways you as a woman are considered to be guilty until you in some way prove the opposite. ‘Evidence’ is here quite an irrelevant word.”

He talks about how the police in Iran are not conducting proper forensic investigations, and that facts is not important in the judicial system.

“If the judge thinks she is guilty for whatever reason,  she is guilty no matter what the circumstances are. It’s also ridiculously humiliating that Reyhaneh’s family have to ask the man’s family for mercy so that they shall spare her life. In this way the system is positioning one family against another. It’s not about proportion, facts or the right to defend yourself, but simply about a system that wants to prove that you as a woman shall not defend yourself and that you don’t have the right to a fair trial. But these kind of cases are not uncommon in Iran, there are worse… In the bigger picture this is not surprising. In Isfahan women have had acid thrown on their faces. This is just one case of many.”