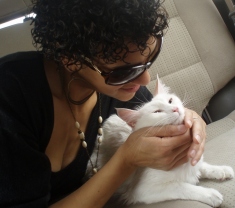 When Riham started the Kuwait Eating Disorder Awareness Campaign in 2012, it was the first of its kind.

“The general idea about eating disorders here is that it’s about girls wanting to be thin”, she says. “But it’s more than weight, it’s an addiction. A Kuwaiti girl saying she’s struggling with an eating disorder is hard.”

It was when Riham was 12 and watched an American movie where a young girl has an eating disorder, when the idea struck her: “I think that’s what I have”. It was in the early 90s and she was in the US where her father was a diplomat. Although Riham seemed to have a word for the rules she put up for herself around eating – she was only allowed to eat a certain number of foods, the food couldn’t touch either on the plate – she kept it to herself.

The family moved back to Kuwait and things got worse. Riham started overeating and quickly gained a lot of weight. She didn’t speak Arabic very well and her self-esteem dropped with her new extra kilos and the struggle with the new surroundings. Eating disorder was recognized internationally but in Kuwait the issue was not recognized, just like other mental health problems was often a taboo, even though many of the country’s inhabitants were suffering from psychological problems after the Gulf War. Still, Riham’s father paid attention to her problems: “On the contrary to what people think about fathers in the Middle East, my father saw exactly what was going on.”

Riham’s father made her see a psychiatrist when she was 21, but the doctor didn’t understand that her binging and vomiting was nothing that she could just stop doing, and although remaining in therapy her eating disorder remained unchanged for several years. To her great sorrow she lost her father at the age of 25, before she had been able to progress: “He never saw me getting better.”

A few years later she found information about Timberline Knolls Treatment Center in US online, and gave the support line a call just to see what they would say. The person on the other side of the line made Riham open up, and she felt trust. She decided that she wanted to have the treatment at the treatment residential center, to finally try and come to terms with her disorder. Riham’s family agreed on paying for the quite expensive treatment in Illinois. Two weeks later she was on a flight to the US.

In the center she lived with 35 other women that suffered from the same problems as she did. In short time she learned to overcome and master her disease that she had been battling since the age of 10. Her family took part in the regular therapy sessions by phone, even if that meant them having to get up in the middle of the night to participate. Riham improved quickly: “It was residential treatment that I needed. It completely changed my life.”

Three months later she signed out from the center and returned home, where she was to take another important step in her new life.

Not only were there no groups or therapies for people suffering from eating disorders in Kuwait before Riham’s campaign started – in all of the Middle East there is no residential treatment center for eating disorders, why many young girls and boys are left on their own. It was in such an environment Riham came of age, and this was what she wanted to change.

Upon her return from Illinois she started a training to be an eating disorder specialist. She describes herself as healthy and in recovery, with a lot of support from her “conservative, typical Kuwaiti family” – a family that is very happy to see a grown-up Riham helping other young women overcome what haunted her for years.

“My ultimate goal is to open a residential center in Kuwait or the Middle East. When you talk about it you kill the secrecy around the eating disorder.”

Her first step, the campaign, received a lot of attention when launched. Riham became a member of Middle East Eating Disorder Association, was soon in the board of directors, and chosen to be the Kuwaiti representative. She started a support group that now hold meetings every Sunday and have a number of young women attending. As her new mission started to take up most of her time, Riham quit her previous job to work full time towards changing the society by raising the awareness, not only regarding eating disorders, and maybe not only in her own country, but in all of the Middle East:

“There is a stigma around mental health issues here that I want to change. A person with these problems is not the crazy person walking around in the street; it’s someone like you and me.”