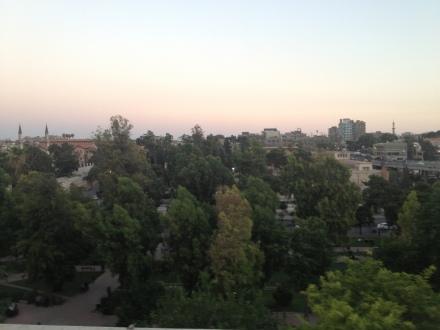 View from 4 Seasons Hotel in Damascus

News from Damascus are always depressing nowadays. But it used to be a vibrant city, full of life. When I lived there last year the fear of the war was present in the city, but here are the words of a young woman from Damascus and how her life used to be before the war.

“I grew up in Damascus and when we went to visit the village my parents came from, I just wanted to go back home. My parents’ village is beautiful, green and with fresh air, but it’s not like the city. In Damascus I had everything; freedom and friends.

Summers were the best. My cousin was older and worked in Saudi Arabia and used to come home for vacation in the summers. She got divorced and when she came home she wanted to have a good time, to live a free life, a life she couldn’t live over there. When she was in Damascus I packed a bag with all my stuff and moved in with her. She rented a flat downtown and I stayed with her there all summer. My family was angry with me for moving out from them, they thought my cousin had bad influence on me, but there was nothing they could do. I had become so independent from them since I started working and making my own money.

Me and my cousin never cooked, we just ordered take out to the house or went to restaurants. We went to the swimming pools somewhere in the city and ordered sheesha. In the evenings we went clubbing, there were many nightclubs to go to, and there were always a lot of guys after us. We had a good time with them, we let them pay for everything, then when we got bored with them we just hopped in a taxi and left” (she shows how they teasingly waved goodbye from the car window while laughing) “We never talked politics back then. She supported the president, she thought it was because of Bashar al Assad that she could live a free life in Syria comparing to the life she had as a divorced woman in Saudi Arabia. I was against Assad, just like my father was, but me and my cousin never spoke about it. We just had a great time together. I loved my city.”